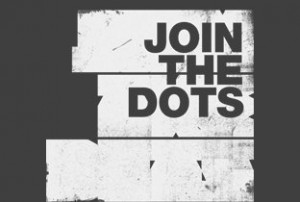 As a gametype, I love ONSLAUGHT.

DeathMatch (DM) and Team DeathMatch (TDM) gametypes have a simple no-brainer goal: racking up kills. Skill plays a part in it, as does knowledge of the maps: knowing areas to hide, places to jump, safe and dangerous zones, routes to navigate, etc.

These attributes also help on Capture The Flag (CTF/vCTF) and Bombing Run (BR) gametypes, but here the aim of the game anchors you to a base – whether it’s defending your own or flag-snatching from the opposition… all of which provide the wider team objectives: getting the flag/ball to a fixed point. Life is unimportant for these gametypes: it’s not uncommon to sacrifice yourself in favour of the ball/flag getting to its destination – racking up kills is no good if the team loses 3-2.

The same holds for Domination, except each point is owner-less – it could be blue or red – but still, map knowledge provides an advantage in deciding which direction to take towards cover or exposure, etc.

ONS combines several of these objectives together: it’s not just a killing game, there’s cores (the base) to defend and attack, but you can’t immediately mount an attack on the enemy base or snatch their flag – you need to work your way up gradually by linking nodes. However, once players get to know the map well the game becomes a similar plod consisting of satisfying specific smaller key objectives to guarantee overall success.

Hence having random/new link configurations injects some freshness into the game: it’s still the same map with same weapons, vehicles, etc – but the order in which nodes are taken changes gameplay somewhat.

So I’ve been playing with link configurations and realised they’re not just some random join-the-dots. Each pattern imposes a particular influence upon gameplay, and more complex configurations are simply aggregates of some basic atomic building blocks. Let’s take a look at these simpletons in detail.

The simplest pattern is a fight over one central node (which seems too simple for any Onslaught map but it’s the fundamentals of ONS-Frostbite):

The attacking strategy here seems fairly obvious: seize the node then attack the enemy base. Once the node is captured, the opponents’ defensive strategy determines the outcome of that game:

So defenders need to consider resource allocation carefully: do they send a small party of good players out to attack the node, leaving the majority of their forces to defend and buy their counter-attackers some time? Or should they keep their good players in defence, letting a larger army swarm the node?

Consequently, attackers may need to rethink their strategy: everyone advancing onto the core leaves the node unprotected for the counter-attack. Should the better players hold the node for a stronger defence, or charge forward to take down the core quickly whilst their defence team buys them attacking time?

Let’s now consider a 2-node configuration. There are really only two ways of linking these: 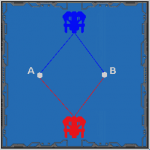 This multi-route configuration works much like the single node approach, in which an attacking team not only need to defend their captured node, but can also protect their own core by attacking (or at least hinder the capture of) the enemy node.

Consider also actual node placements: what if if the two nodes weren’t equidistant from the cores? As an example: 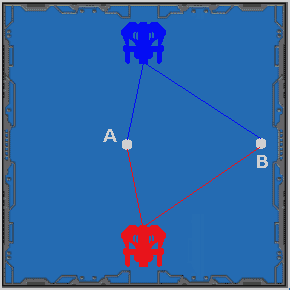 For this setup, the A route appears more desirable than B – given the shorter path – until terrain characteristics are considered, such as:

If a node looks undesirable compared to others, there must be a reason to bring it into play; the distance disadvantage should be balanced against benefits of seizing that node – otherwise both teams will easily shun it. 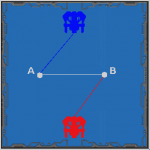 Unfortunately parallel path setups suffer from an isolation issue: it’s possible for both cores to be in danger simultaneously, meaning both teams could advance onto the enemy core without ever meeting each other, so gameplay simply descends to a race-to-finish.

The linear path – nodes being linked sequentially – forces the teams to meet, so sides initially race to capture as many nodes as possible before the eventual clash, when the usual attack/defend splits occur with teams, with advancement measured by numbers of captured nodes.

But let’s not forget aspects of the map itself, in particular node placement. Consider a map in which nodes are placed in fairly close proximity to the cores. One such link configuration is an obvious Shortest Path First chain, ie.: 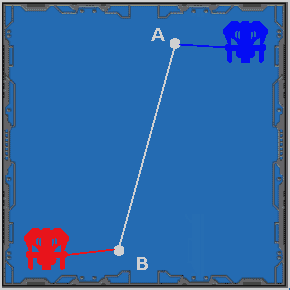 However, there is another route – The Longest March – a route that maximises travel between nodes: 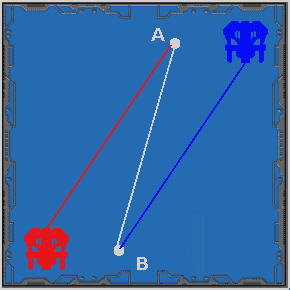 This particular configuration increases the possibility of an earlier face-off, and biases combat against attackers:

Once a node is seized, doubling back to the next node provides several opportunities to encounter opposition – and conflict is fun, folks!

Again, terrain itself needs to be considered: paths between nodes aren’t necessarily straight lines, and some nodes could be underground or tunnelled (ONS-Sanctuary is a good example) so overhead transport may not be the best tactical choice.

In the second part of this article, we’ll discuss configuration patters for three (and more) nodes.